What's wrong with these cards?

I received an order through my online card shop the other day that brought back some good memories. I suppose a blog entry about what people order might be interesting, but I'll save that for another day.

This particular order was for most of the 2011 St. Louis Cardinals cards we had in stock, not surprising considering they won the World Series. I happened to get into an email exchange with the Cardinals fan who placed the order and found out he was putting together some Cardinals team sets. (I always enjoy when these email exchanges happen because I feel it adds a 'Mom and Pop' feel to an online store).

Why did this order spawn a memory you might ask? Well, I'm a Tigers fan and I was born in 1968 so the follow trivia question may shed light this.....

Question - What 2 teams played in the World Series in 1968 and what team won?

Alright, back to the memory..... In 1979 my dad took me to my first card show. He wasn't a collector and I had never been to a card show but it was a day that really hooked me into collecting. I was a little overwhelmed by the variety of cards and had no idea what to buy. That's when my dad, the non-collector, suggested we buy some Detroit Tigers cards from 1968 when they won the Series. My dad was always balanced in what he gave me but on this day he pulled out Tiger card after Tiger card from one of the dealer's boxes. Below are two of the cards he bought me that day.

Can you see what's wrong with them? 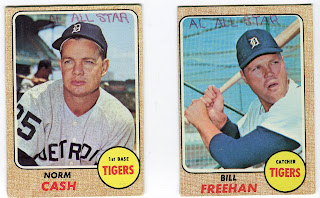 Sure the Bill Freehan is a bit off center and the Norm Cash has a few rounded corners but look closely at the top of the cards.

Do you see the 'A.L. ALL STAR' that's hand written on top of them?

That's right, this dealer wrote on the cards!!! Can you believe that?!?!

These cards have actually remained in my Tigers' album ever since and I doubt I'll ever upgrade them. They remind of of that day with my dad and a simpler time of collecting.

Is there really anything wrong with these cards?
Posted by Erik at 8:03 PM 3 comments: