The Hardest Part of Running My Card Store

I always loved collecting baseball cards as a kid. Like most kids, I hit that age around junior high school or high school where girls and being cool became more important than collecting.

I got back into collecting during my college years back in the mid to late 1980’s. I kept collecting on and off throughout the years but never had more fun than when my youngest son got into the hobby a few years back. That’s when I decided I wanted to start my online card store.

One of the hardest things about running my store is trying to limit what I collect. After all, I don’t want to compete with my clients. I’ve been pretty disciplined at this but I have to admit, the more cards I look at the more I want to collect.

I’ve been collecting vintage Tigers cards from Topps my whole life but I really don’t have many holes left in that collection So I’ve been trying to figure out something I can collect without siphoning from the purchases I make for my business.

A couple of weeks ago I stumbled across a card I purchased for around $10 back when I was in high school. I wasn’t really collecting at the time but I remember I was at our local mall one day and they were running a card show. $10 was a lot of money back then but I remember looking at this card and thinking how cool it was…… 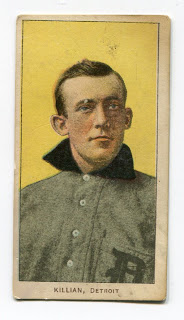 Yep, it was my first (and only) tobacco card.

I probably looked at it quite a bit after I bought it but at some point I tucked it into a shoebox (literally) and went on with life.

A few weeks back I stumbled onto the card again and I got this idea that tobacco cards might be the perfect thing for me to collect. I’m not talking about the Christy Mathewson or Ty Cobb cards, I don’t have anywhere near the budget needed to collect those type of cards. I’m talking about the worn out or unknown player cards that have survived the years. .

So, why tobacco cards?

Well, they won’t compete with what I currently sell, they are old and historic, they are interesting, and…..well…..how cool are they!?!? Maybe I can only afford one (or two) when I go to a card show but I think it will be fun to find an old card and do a little research on a truly old time player.

Here’s my first purchase, made this weekend at a local card show…….. 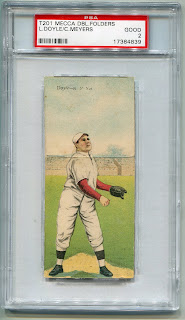 I have no idea about the manufacturer or who is on the card but I think it’s a cool. I’ll have to do a little research on the card and players and turn it into another blog entry.

I guess once you’re a collector you’re always a collector!
Posted by Erik at 10:31 PM