What a Long Strange Trip It's Been...

I mentioned in an earlier post that I’ve decided to start collecting tobacco cards for my personal collection. If you’ve ever thought about buying a tobacco card (or two) but didn’t know where to begin don’t worry about it, just find a cheap one and dive in.

What? Those cards can’t be cheap! Well, relatively speaking they can be. I happened to pick this one up yesterday for only $15. 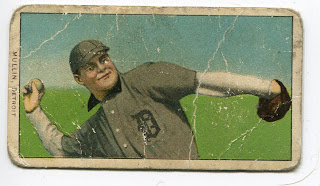 This card is a bargain for a card that is over 100 years old and not mass produced like the modern cards of today.

Sure it’s got rounded corners and creases but that gives it character! It’s fun to look up this player I never heard of, George Mullin, and find out what he did during his career. I didn't realize he pitched the Tigers first no-hitter and has the second most wins for the Tigers. I also think it’s fun to ponder what this card has been through during it’s life.

After the card was produced between 1907–1911, here’s what happened and what the card might have went through…..

The Titanic sailed (and sank) in 1912, there were only 46 states in the United States, and World War I also broke out. Perhaps some young boy looked at this card each evening as a way to escape from the realities of his country being at war.

Television was invented! Maybe the same kid is a bit older now and has put the card away in a box to be forgotten while he is mesmerized by the new invention of television.

Prohibition is in full swing. Maybe this card gets passed down to a nephew to keep him occupied while the adults hang out in the basement having a drink or two.

World War II is at its peak. This card could be helping another boy escape from the realities of his country or family members being involved in a war.

Elvis hits the scene! Does the card getting tucked away again while some teenage boy decides cards aren’t cool and he needs to work on his dance moves to impress the girls at the soda shop?

Hmmmmm…bad fashion, lots of drugs, disco music…..many of the young adults in our country were lost during this time so who knows where this card was…..

The boom years of baseball cards!!! I bet this card was in a dealer case at a show selling for 4 times its current price.....right next to the Mark McGwire rookie cards selling for $125!

During this decade, I guess this card floated around from dealer to dealer for 10 years as the card market tries to find it’s footing.....long forgotten while a new generation of collectors focus on game used and autographed cards.

Now the card has found a good home in my collection and I'll enjoy it for more reasons than the fact it's a Tigers card.